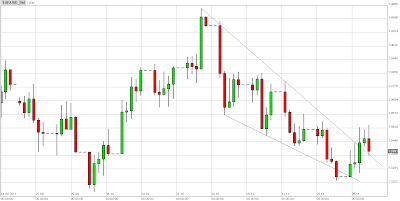 This Willaims % R indicator was moving in the over sold area under the line (-80) or nearby, but noticed that on the daily chart there is a significant purchasing power have led the Willaims % R to rise above the line-50, which represents the median line between oversold and overbought areas.

As for the weekly chart, Willaims % R remains below-80 which means is in the oversold area and it portends an upward movement may extend for weeks to any breakthrough line-80 up and that's what i am waiting.

Chande momentum oscillator featuring that its signals are rare and therefore they are powerful,its signals is in the overbought and oversold areas, as we noticed that on the daily chart the indicator reach the line (-50) wich means an oversold area prices witnessed, it portends the beginning of a new bullish movement, and as for the weekly chart the Chande momentum oscillator is far from the oversold area, but at the same time do not forget that it is under the (zero) line, which represents a median line between oversold and overbought areas and in the case of breaking up the (zero line) would be a good buy and this is what i am waiting.

As for the Intraday momentum index is also have a scarce signals, it supports Willaims % R and the Chande momentum oscillator.

In summary, despite the end of the falling wedge formation, price breakthrough for the upper boundary of the formation representing a buy signal but this movement is a short and will last for days only, but indications predict an advent of a rising movement will extend for weeks and that's mean more profit, and therefore I think you should wait for this movement and postpone the buy decision.

Email ThisBlogThis!Share to TwitterShare to FacebookShare to Pinterest
Labels: Economics