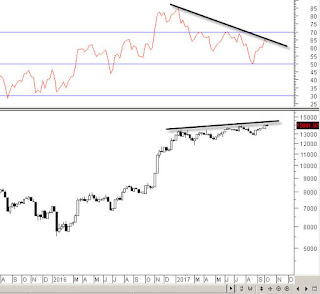 The chart is forming what can be called a " Flat-based peak " it isn't the first time to form such a pattern, also it can be described as " Smooth peak " counter to the " Sharp peak".
This flat-based smooth pattern is considered as a " Trading Range " counter to the " Trending Range ".
So the question is; When this phase is over ?
The answer is simple, a downtrend begins when the chart's value breaks below the low of the this trading range.

And for confirmation; I can watch the RSI Indicator as long as it's value reaches its horizontal upper boundary line (also called overbought line or the 70's line) at the same time of the chart's peaks so the flat-based pattern is continuing.
If the the RSI value unable to reach its upper line at the same time of the chart's peaks but it is easily reaching its lower line so the flat-based pattern is ending. This mean you will see RSI's failed overbought peak in between two successful RSI's oversold bottoms.
As we see on the attached charts above, the RSI's data indicating for the start of a corrective move downwards , also RSI & macd both gave (-)ve bearish divergence signals indicating for trend weakness
Support level at 12900.
Posted by Unknown at 1:34 PM