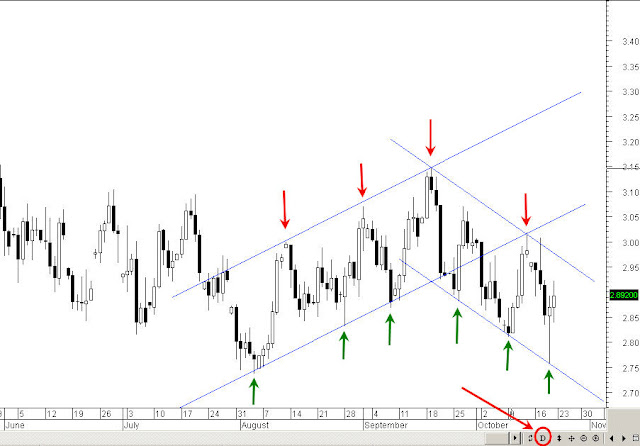 Also it was noticed on the long term scale a formation of a major falling wedge (Bullish pattern) by connecting the two peaks together (February 2014 & December 2016 peaks) & connecting the two bottoms together (April 2012 & March 2016 bottoms) & the two lines are falling & at the end they intersect with each other forming the falling wedge & most likely the upper line will be broken upwards triggering the buying signal & the target will be by adding 3.57 to the breakpoint price value.

But for the intermediate term; it is in a sideways confirmed from May 2017, this sideways will continue as long as the price is in between (2.504 support & 3.413 resistance), also it is a good opportunity for trading (Horizontal Trading Zone).

& for the short term; it is in a minor downtrend confirmed from October 6th 2017.
Short term trend channels were applied on the daily time frame & now the price is inside a short term downward channel started from September 25th & confirmed from October 6th till now & retesting its boundaries, if the price breaks the upper then buy & target will be by adding 0.23 to the breakpoint price value & if it breaks the lower boundary then sell & target will be by subtracting 0.23 from the breakpoint price value.
short term downtrend will continue by breaking 2.756 downwards & will end by breaking 3.018 upwards.